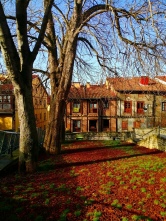 There´s a local joke about Vitoria Gasteiz: in the capital city of the Basque Country there are two stations, the train station and the winter season (in spanish language – just like in portuguese – the word ‘estación’ has a double meaning, it can be used to refer to a station or to the season).

Here is the first coincidence: I arrived in Vitoria Gasteiz exactly by train and in winter, in the last days of January. And another coincidence: I took with me a book called ‘Victoria’, written by Knut Hamsun, a norwegian author.

Forgetting the name coincidence, there´s a better literary recommendation related to the city: ‘The Silence of the White City’ is a trilogy written by the local author Eva García Sáenz and follows the footsteps of an investigator, chief Ayala, trying to unravel a series of crimes. 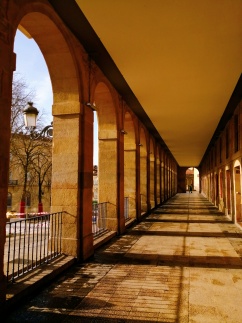 Vitoria Gasteiz is a modern city with a medieval uptown, my favorite area to be honest: viewed from the sky, this area has the form of an almond, thanks to the Santa Maria cathedral, surrounded by streets that converge to her from both sides.

Santa Maria cathedral is, in fact, part of another highlight of Vitoria Gasteiz: a skyline composed of four towers: besides Santa Maria´s cathedral, another three religious spires adorn the local sky, the San Miguel, San Pedro and San Vicente´s churches.

But don´t worry, if you´re not into religion, there´s a lot to do and to see in the city. One of my favorite activities was to discover the local street art. Vitoria Gasteiz has an impressive collection of murals, thanks to an initiative called ‘La Ciudad Pintada’ (‘The Painted City’). It was hard to decide my favorite one…

Anyway, the most creative and interesting local street artist is, definitely, Relata. A collection of cans color the walls and compose phrases that make you wonder around the city.

Besides the coincidences, there was another fact to confirm I arrived in Vitoria Gasteiz at the right time: it was a sunny long day and the streets were crowded with smiley people outside, talking and laughing.

This friendly and vibrant mood inspired me to roam around the medieval old town, with my Hamsun´s novel, and suddenly I found dozens of locals sitted in the street, surrounding the door of a place called Aldapa.

Aldapa is a bar and one of the local hidden gems: it serves a collection of homemade drinks that mix coffee and alcohol. Every drink has a geography name related and I took the house suggestion, Jamaicano. Spoiler alert: although the recipe is secret, it includes cream.

Another suggestion: by the evening, and after your Jamaicano in Aldapa, walk up, a few meters to the viewpoint in front of San Miguel church, and admire the sunset that composes the west side of the city.

Then return to the downtown: follow the cobblestone stairs and reach the center by the Virgen Blanca square, right in the heart of the city, where every year the local festivities take place, on the 4th of August.

A visit to Vitoria Gasteiz is not complete until you discover the Green Belt, a collection of pedestrian paths composed by palaces (such as the impressive Fine Arts Museum) and romantic gardens, with the cherry on the cake: the Armentia forest.

I spent three wonderful days discovering a unique and peaceful city. I left with beautiful memories… and a wish: to seize Vitoria Gasteiz for a longer period. Any suggestions on how to concretize it???

For now, I think I’ll start by contacting the local authorities to help chief Ayala to solve the crimes plotted in the ‘white city’ trilogy by Eva García Saénz.

Over the last years I’ve managed and developed this blog as a meeting point to connect travelers and bloggers, writers and photographers, you and me.

You have now the chance to show me your support and value my work: subscribe premium for just 5€ and get access to exclusive content, enjoy discounts on my ebooks and walking tours and much more.

Subscribe PedroL Premium now and give me more time and energy to dedicate to our blog. Thanks!

back to travel chronicles

45 responses to “On the Road: Vitoria Gasteiz, in the Heart of the Basque Country”

tired eyes? listen to my chronicles